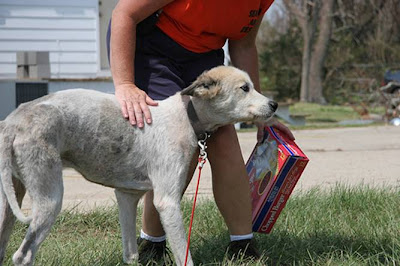 Rescue workers searching after the Kansas tornados found this guy whom they named Ralphie... 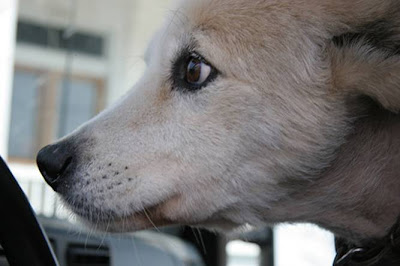 Ralphie was a little nervous after being separated from his owners and riding out a Kansas tornado... This building was thought to be uninhabited, but then... 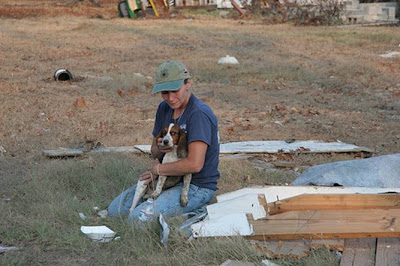 They found this terrified beagle in the ruins. 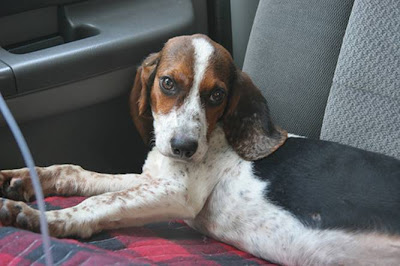 He settled in nicely in one of the rescue vehicles... 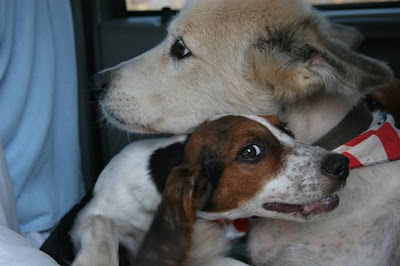 meeting up with Ralphie. 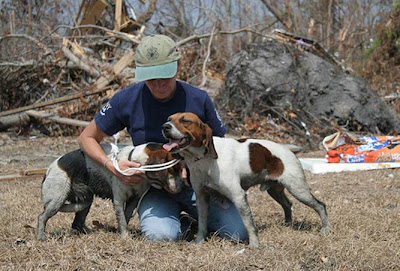 Then, two more frightened beagles pulled from the wreckage... 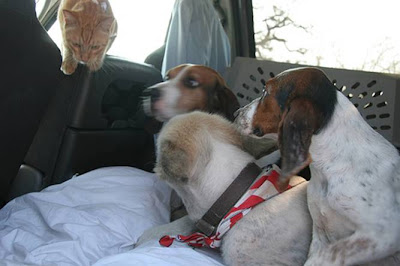 They decided to join the crowd in the rescue vehicle... along with a rescued cat... 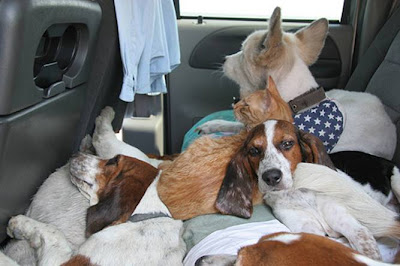 Not a problem... everyone getting along fine. 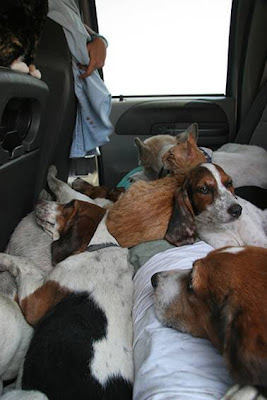 There's a lesson to be learned from these guys...

Posted by redpups at 8:24 PM No comments:

The current award standings for the National Red Setter Field Trial Club are now available at our website at http://www.nrsftc.com/Standings.htm

Posted by redpups at 9:37 AM No comments:

Bring Your Red Setter To Work! 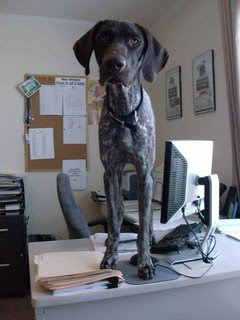 The National Red Setter Hall of Fame nominations for 2010 are... 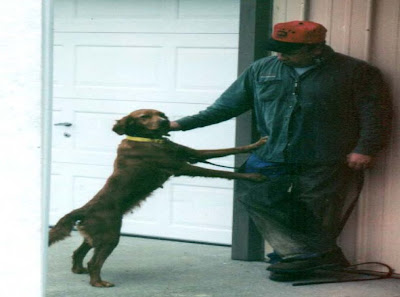 Rock The World visits with her buddy Tim Hammons 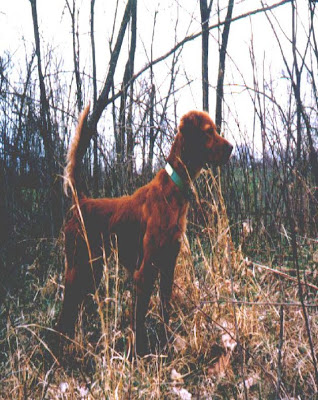 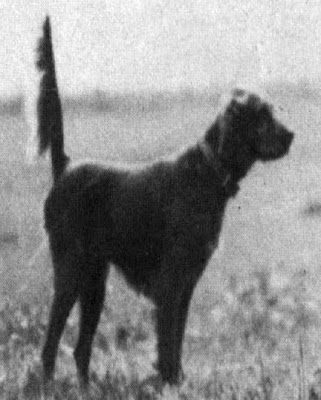 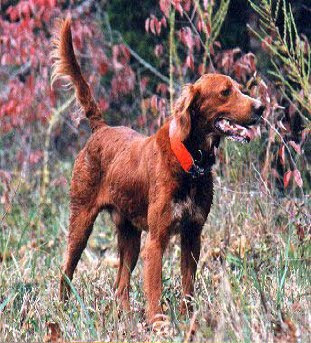 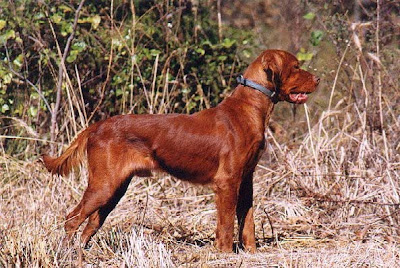 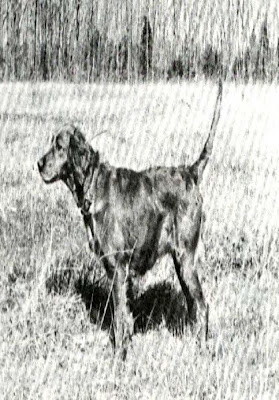 NRSFTC members will be receiving voting ballots in the upcoming issue of the Flushing Whip. Be sure to cast your ballot postmarked no later than September 6 to be counted!

Henry Taylor of Grain Valley,Mo. died the last part of May. Henry was one of the founding fathers of the Santa Caligon Irish Setter Club. In the 60's and 70's Henry ran red setters here in the midwest. His kennel prefix was Whirlaway. Some of his red dogs were Whirlaway Pat (Ike Jack Kendrick son), Whirlaway Chief, Johnny Popper. Henry and a gentleman by the name of D. Johnson were instrumental in bringing Ned LeGrande's red setters to our part of the country. Henry Taylor was introduced to me in 1967. My dad had told me he would pay half of a birddog pup. My research at the public library Indicated if you found Irish Setters bred for the field, there would be no equal. I bought my first red setter after a disagreement with my dad. He didn't consider the red pup a good candidate so I bought Lady on my own. A few years later I decided I wanted to raise a litter. I asked advice from my boy scout leader who field trialed. This was my first contact with Mr. Henry Taylor. This man was opinionated, sometimes rude and obnoxious. He was one of the BEST men I ever met. Henry would help anyone when asked. When I decided to break my first dog this was the man I asked for advice. When I went to my first horseback trial at Lee's Summit, MO. I rode a horse furnished by Henry. The Shepler's saddle that I ride originally belonged to Henry. The red setter fraternity lost a good one.
I will miss him.

Henry was born February 25, 1930, in Belton, Missouri, the son of Henry O. and Emma Lou (Muir) Taylor. He married Mary Carnahan in June 1950. Henry worked in the maintenance department at Sears, where he did mostly carpentry work. He retired from Sears after 37 years of service. He was active in field trials and loved bowling.

This month's issue of The Flushing Whip, the official publication of the National Red Setter Field Trial Club, is devoted to our nominations to the Red Setter Hall of Fame. There are also some interesting articles dealing with red setter history, and an update on our current awards standings. Normally, only club members receive the Whip, but because of the Hall of Fame dogs being mentioned, we thought that some of you might enjoy reading this issue. Our editor, Deborah Fazenbaker, converted this issue to an easy to read PDF format. (if the pages are small, remember you can increase the page size in Adobe Reader at the top). Hope you enjoy this month's issue of the Whip!

If you are interested in receiving the Whip on a regular basis, please shoot Deb an email at flushingwhip@gmail.com and she will be happy to sign you up and make you a part of the "Purest Challenge!"

Thanks everyone,
Allen Fazenbaker
Posted by redpups at 2:46 PM No comments:

Remember our soldiers who are making the sacrifice...

Posted by redpups at 9:53 AM No comments:

Our red setter Finn McCool participated in the annual Fourth of July parade in Chardon Ohio, as he has several times in years past. This year he caught the attention of the local newspaper, and made the press. Finn is the "mascot" of the Flushing Whip, and is usually in the company our editor Deborah Fazenbaker. He was bred by Francis Fountain of Georgia out of Quail Ridge Gabe. 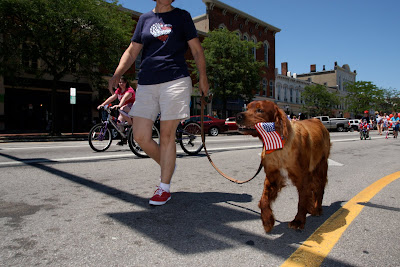 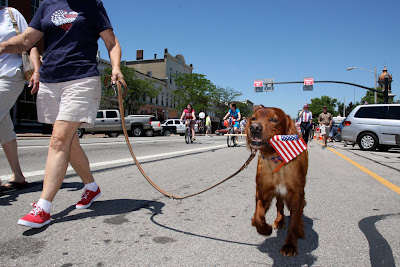 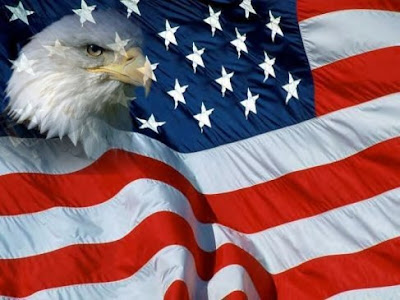 Posted by redpups at 2:46 AM No comments: 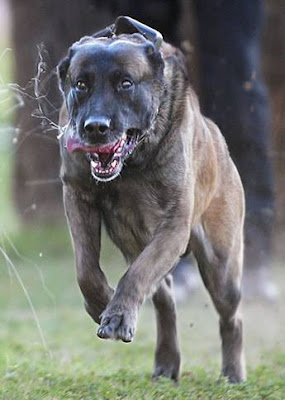 The K9 above is Brutus, a military K9 at
McChord.. He's huge - part Boxer and part
British Bull Mastiff and tops the scales at
200 lbs. His handler took the picture. Brutus
is running toward me because he knows
I have some Milk Bone treats, so he's
slobbering away! I had to duck around a tree
just before he got to me in case he couldn't
stop, but he did. Brutus won the
Congressional Medal of Honor last year
from his tour in Iraq . His handler and four
other soldiers were taken hostage by insurgents.
Brutus and his handler communicate by sign
language and he gave Brutus the signal that
meant 'go away but come back and find me'.
The Iraqis paid no attention to Brutus. He
came back later and quietly tore the throat
out of one guard at one door and another
guard at another door. He then jumped against
one of the doors repeatedly (the guys were
being held in an old warehouse) until it opened.
He went in and untied his handler and they all
escaped. He's the first K9 to receive this honor.
If he knows you're ok, he's a big old lug and
wants to sit in your lap. Enjoys the company
of cats.. K-9 Congressional Medal of Honor
Winner.
Posted by redpups at 6:18 AM No comments:

Conneaut Creek Holly's Memory out for a romp in the yard...

Posted by redpups at 7:32 AM No comments: 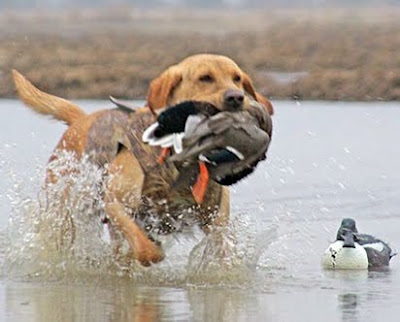 
(Columbus, Ohio) – Ohio’s sporting dog owners and hobby breeders are breathing easier after Governor Ted Strickland committed only to support legislation aimed at commercial dog breeders if it preserves adequate protections for sportsmen. The Governor’s commitment is intended to assure sporting dog owners who are concerned that any legislation addressing commercial breeders be done in a way that does not catch hobbyists and hunters in a web of regulations and restrictions.
“The agreement between Ohio agricultural leaders and the Humane Society avoids a costly ballot initiative that would have severely impacted our agricultural community. Instead, the Humane Society has agreed not to pursue a ballot initiative this fall. Importantly, as part of this agreement, we will develop recommendations to the legislature in support of the commercial dog breeding bill,” said Governor Strickland. “I know that Ohio sportsmen have worked hard to ensure that legislation includes provisions that ensure they are not treated as commercial operators. Consistent with our agreement, my support is for the current version of the legislation which includes those important protections for sportsmen and women. In other words, this legislation will in no way interfere with the rights of Ohio sportsmen and women.”
As part of a compromise between the Ohio Farm Bureau Federation (OFBF) and the Humane Society of the Untied States (HSUS), the Governor agreed to push for enactment of Senate Bill 95, sponsored by Senator Jim Hughes (R- Columbus), which is intended to address sub-standard conditions in some commercial dog breeding operations. As originally written the bill would have greatly impacted sporting dog kennels and hobby breeders who largely do not sell dogs. The US Sportsmen’s Alliance (USSA), through its Sporting Dog Defense Coalition, worked vigorously with legislators to convince them to adopt amendments ensuring that sportsmen were not treated as commercial operators. Adoption of these amendments in the current Senate bill allowed the Alliance and its coalition allies to withdraw opposition to the legislation. Now sportsmen are counting on Governor Strickland to help preserve the protections.
“We really appreciate the Governor making it clear that he will not allow any bill to become law unless it maintains critical protections for the sporting dog community,” said Rob Sexton, vice president for government affairs for the USSA. “Without these protections, law abiding sportsmen and other enthusiasts would be run out of existence because they do not produce enough revenue to offset the cost of regulations and restrictions. Senator Hughes agreed to these changes to prevent that from happening and with the Governor’s pledge, sporting dog owners can rest a lot easier.”
The compromise between HSUS and OFBF resulted in the animal rights group agreeing not to submit signatures for a ballot issue that would have forced new regulations on Ohio’s livestock industry. In exchange, the Governor agreed to support specific changes in livestock pen sizes to be phased in over the next 15 years, the dog breeding bill, legislation dealing with cockfighting and issue an executive order concerning exotic animal ownership.
Posted by redpups at 6:15 AM No comments: