It's time to call in your entries for the Red Setter Shooting Dog Championship... for details, check out our trial ad at http://www.nrsftc.com/PDF/TrialAd.pdf
Posted by redpups at 9:52 AM No comments:

I just got back from the inaugural Ruffed Grouse Society habitat benefit bird hunt in northern New York. Two days chasing grouse and woodcock on commercial timberland in the vicinity of Malone, NY. I carried camera and compass and worked the dog while two hunters did the shooting (a total of 14 hunters and 7 huntsmen participated).  Weather was mild, no major flights of woodcock yet, but we moved 20+ birds (mostly grouse) per day. Nice habitat and plenty of it.
The red dog, Brody, is a 3 yr old male out of Bearcat and Saturday Night Ed lines (sired by Chaparral). Sunday afternoon was particularly nice as Brody was finding a few woodcock along a transition of mixed hardwoods/spruce & fir lowlands to alder swale. He had a bit of a limb find at the edge the alders and it took a few minutes to get the guns in place, so we were a little surprised when a grouse finally rocketed up.
﻿
﻿  Rick cleared a couple alders with the first two shots before his third shot wing-tipped the bird. Brody hunted "dead", finally pinning the running bird 80 yards farther out in the alders and grass near the edge of a beaver flowage. That bird had its running shoes on. I don't think I've ever been happier to recover a downed bird as I was with this one.
﻿
On the way back to the truck Brody pointed another grouse and a few more woodcock -- two of which the guys shot and Brody retrieved. ﻿This was my first time hunting in the St. Lawrence/northern Adirondacks region - now that I know, I'll be making a habit of it.
Posted by Path Walker at 8:21 AM 1 comment: 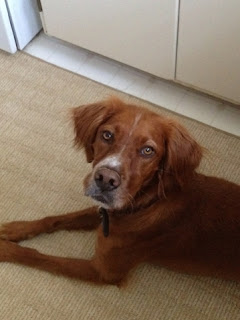 Happy Birthday Finnagen!  Finn was 4 years old on Sept. 26 2012.  He lives with Mary Cornely in Ohio.  Finn is out of King Cormac x Flushing Whip Flash Edition.
Posted by redpups at 5:32 PM No comments: