Membership voting for the Red Setter Hall of Fame ends on September 6.  Ballots must be postmarked no later than that date to be considered.      Only ballots sent with the Flushing Whip will be accepted.  If you haven't yet voted, be sure to mail your ballot this week! 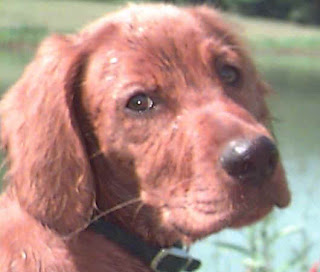 Posted by redpups at 8:15 PM No comments: 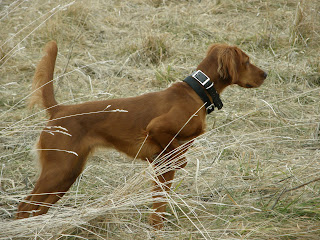 Congratulations to Red Delicious Breelie, the Region 10 Shooting Dog of the Year!  "Bree" is owned and handled by Craig O'Brine of Yakima Washington.  Bree is out of Saturday Night and Bearcat bloodlines.

Way to go Craig and Bree for Honoring the Purest Challenge on the West Coast!

Posted by redpups at 6:46 PM No comments: 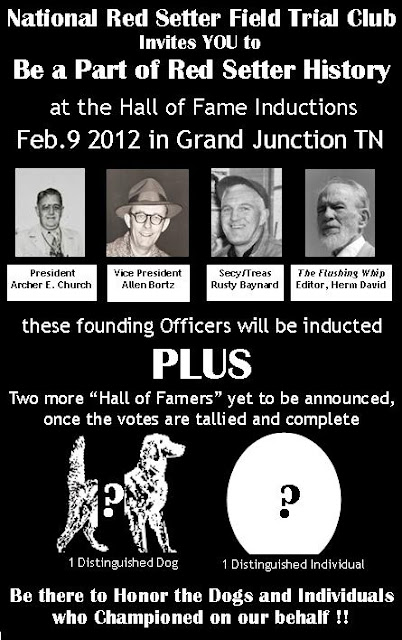 Posted by redpups at 9:13 AM No comments:

The National Red Setter Field Trial Club is hard at work preparing our new  display area at the National Bird Dog Museum!  The club recently purchased custom made cabinets made possible through the generosity of several donors to our Foundation, which funded the cabinet project.  If you haven't been to the museum, it's worth the trip! 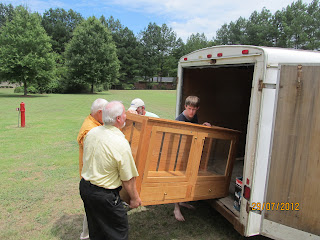 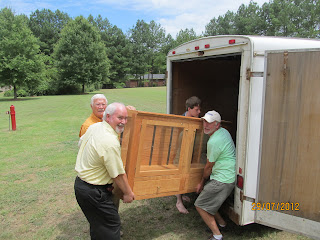 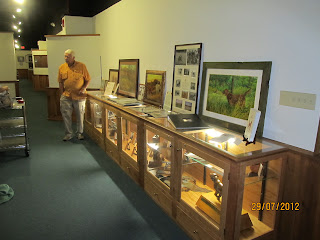 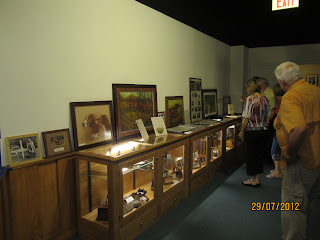 The cabinets are lighted and secure. 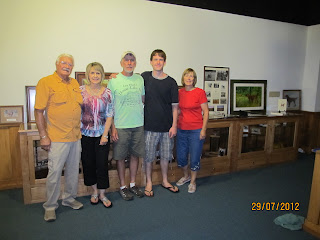 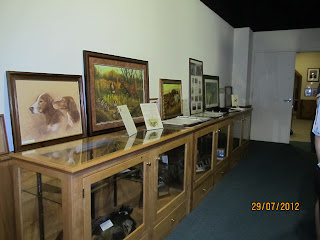 Red setter display area is in a "prime" location... right at the entrance! 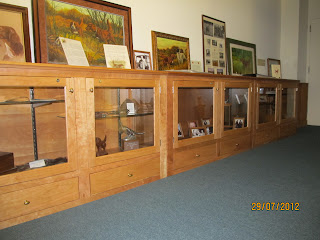 Cabinets are custom made by "This Old Wood" cabinetry shop in Albion, PA.  They are made of cherry hardwood. 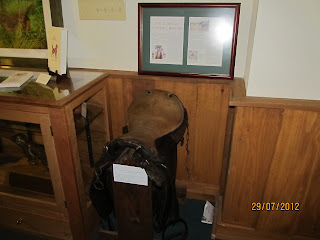 Bob Schweiger's famous saddle also resides in a place of honor in the red setter wing.  This is the saddle Bob rode during his trip from Chicago to Oklahoma in 1976 in support of the National Bird Dog Museum.  Bob also strongly supported the National Red Setter Field Trial Club during his travels.

Special thanks to everyone who donated to the cause!  In our next phase, we hope to raise sufficient funds to purchase some multimedia equipment for the wall above the cabinets.

The Right To Keep Dogs... 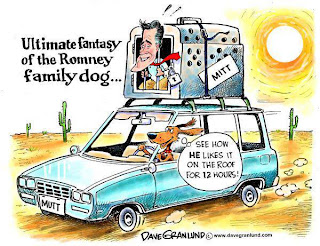 The Right to Keep and Love Dogs I happened upon a Northern Virginia apartment rental ad which is typical. The $1000 a month renter can have one (25-pound) dog, must pay between $35 and $200 extra rent, and provide an (unspecified) non-refundable pet deposit. The Dog Fancy and its tool the AKC, was and is devoted to the very rich who have no trouble keeping or transporting their dogs. Since, for generations, the Fancy sucked up all the air in the American dog room, their indifference to ordinary folk meant that nobody lobbied lawmakers to advocate for sensible dog ownership policies. Nobody.Unlike silly old France, Americans can't take mannerly dogs on trains or buses or into cafes. Unlike most of Europe, our dogs are viewed legislatively as public nuisances if not a threat to life and safety. The American lower middle class and working poor must deal with onerous, expensive and trivial restrictions that make it far more difficult for them to keep the dogs they love. A few figures. There are 25 million Latino voters 16 million African-American, 5 million financial services employees, 3 million farmers, 1.5 million auto industry workers, 400,000 doctors, and _ million LGBT. Thirty-nine percent of American households own a dog. Assuming 2 eligible voters per household and 50% participation, that works out to 110 million voters with a dog. Discounting, say 30 million who wish they didn't, that leaves 80 million Americans who care about their dog and would like to have better access and fewer nonrefundable deposits. Yet, they have no political power - none.We dog owners have no NRA, no American Medical Association, no US Chamber of Commerce, no Farm Bureau, no NAACP, no AARP. The only dog organization promising to better the lot of American dogs and American dog owners is the God damned American Kennel Club which has done zip shit.  Must have been too busy grooming. Did Seamus ride the Romney roof in vain?

(from the Terrierman blogger...)
Posted by redpups at 5:51 AM No comments: 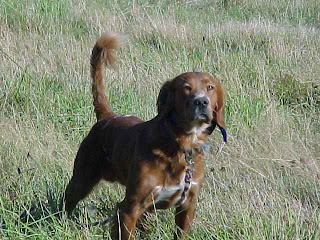 Come and join us!
Posted by redpups at 7:55 PM No comments:

Rabies May Not Always Be Lethal...

Untreated Rabies May Not Be Lethal for All, Study Says

Some have natural resistance to infection from bat bites, researchers report

By Maureen Salamon
HealthDay Reporter
WEDNESDAY, Aug. 1 (HealthDay News) -- Bucking the notion that untreated rabies always proves lethal to humans, scientists studying the virus in isolated pockets of the world have found evidence that either natural resistance or an immune response may stave off certain death for some.


Traveling to the Peruvian Amazon, where outbreaks of rabies infections are spurred by highly common vampire bats, researchers from the U.S. Centers for Disease Control and Prevention learned that 10 percent of natives appeared to have survived exposure to the virus without any medical intervention. Another 11 percent were found to have antibodies in their blood that would neutralize rabies.
"This is a potential game-changer if the study is repeated successfully," said Dr. Rodney Willoughby Jr., a pediatric infectious disease specialist at Children's Hospital of Wisconsin and the author of an editorial accompanying the research. "It suggests either that rabies is not universally severe or fatal [HIV used to be thought of this way] or that there are ways of conferring relative resistance to rabies in humans. If the latter could be identified -- these days, probably through genetic sequencing -- then that might afford insights into prevention or treatment."
The study is published Aug. 1 in the American Journal of Tropical Medicine and Hygiene.
An average of two to four people die in the United States each year of rabies after bites from animals such as bats, dogs or raccoons. Though nearly wiped out in the United States due to domestic animal vaccinations, the infection kills about 55,000 annually in Africa and Asia alone. For those who believe they're infected, a series of shots are 100 percent effective at preventing death.
In Peru, vampire bats regularly seek out meals of mammalian blood from livestock and humans, using extremely sharp teeth and a blood thinner in their saliva aptly known as draculin to feed on sleeping people without awakening them.
CDC researchers interviewed 92 people, 50 of whom reported previous bat bites. Blood samples were taken from 63 participants, with seven found to have rabies virus-neutralizing antibodies. Only one of the seven reported receiving a rabies vaccination, which would generate such antibodies, but no evidence existed that the rest had sought either a vaccination or treatment for a bat bite.
Study author Amy Gilbert, a postdoctoral fellow with the CDC's National Center for Emerging and Zoonotic Infectious Diseases, said the research suggests the rabies virus is not invariably fatal to people.
"Generally, most folks presume we don't develop antibodies to respond to rabies exposures," she said, "but this was a scenario where clearly there were exposures to the virus that did not lead to disease. I think the same recommendations and advice still hold -- that anyone with a bite exposure to a bat or other carnivore needs to seek out post-exposure [injections]."
In his editorial, Willoughby noted two recent cases in the United States (in Texas and California) where children recovered from rabies without intensive treatment after suspected bat bites. 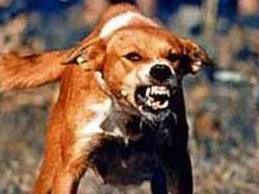 "Knowing that there is a continuum of disease, even for infectious diseases like rabies, should push us harder to try for cures when confronted by so-called untreatable infectious diseases," he wrote. "Modern therapeutics can move us . . . toward greater survival, even when specific cures or antidotes remain undiscovered."
Posted by redpups at 6:30 AM No comments: