Wiry, smooth, curly or straight - the genetic reason for the array of coats of different dog breeds is surprisingly simple, say scientists.

The research could aid the study of the causes of genetic diseases that affect both dogs and humans.

The team was led by Elaine Ostrander from the National Human Genome Research Institute (NHGRI) in Bethesda, US.

She and her colleagues took DNA samples from 1,000 dogs of more than 80 different breeds as well as from a number of wild dogs, including wolves.

These samples gave the scientists access to each dog's genome, which they were able to analyse. They looked for "signposts" of DNA variation, called single nucleotide polymorphisms.

These signal a mutation or change in the DNA code that could account for a particular characteristic.

Edouard Cadieu, a member of Dr Ostrander's research team decided to use this genetic data to study the dogs' coats.

"There are lots of obvious differences between dog breeds," said Dr Ostrander, "but the coats are just remarkable.

"It seems that every breed has a different coat. Some are long, some are short, some are curly, some are bristly, some are smooth, and there is every possible mixture therein."

Dr Cadieu searched for patterns that might reveal the genetic cause of this variety.

Dr Ostrander explained: "For example, for long hair he looked for a commonality in long-haired breeds that's distinct from what we see in short-haired breeds.

"Edouard started out looking at texture - or wiry hair - and quickly found that there was a single gene primarily responsible for that, as well as (for) the moustache and eyebrow pattern that you see in dogs like the schnauzer."

He then moved on to length, and then to curliness. And for each characteristic he identified a single gene that was primarily responsible.

In each case there was an ancestral or "wild-type" form of the gene that dogs inherited from wolves.

There was also a variant or "domesticated form" that had been selected by breeders looking for particular traits like longer hair.

Breeds with more wolf-like coats - such as those with short, straight hair like a beagle - displayed the wild-type version of the gene.

"Just by mixing and matching... these three different genes, we could account for most of the variation that we see in coats in domestic dogs," said Dr Ostrander.

The researchers say that the lessons learned from this study could help in the study of diseases that affect both humans and dogs.

Cathryn Mellersh, a geneticist from the Animal Health Trust in Suffolk, UK said: "This study is important because it proves a principle.

"You can use the dog genome as a model to investigate complex conditions and boil them down to a surprisingly small number of genes."

Dr Ostander concluded: "From a medical point of view, this simplicity is great news."

It means, she said, that the problems of diseases with a genetic basis are "much more solvable".

Dr Ostander also expressed her thanks to all of the dog-owners who donated DNA samples from their pets.

"They've turned out to be extremely helpful, and this data set is just going to keep giving and giving."

Posted by redpups at 8:24 AM No comments:

How Often Do You Mutate? 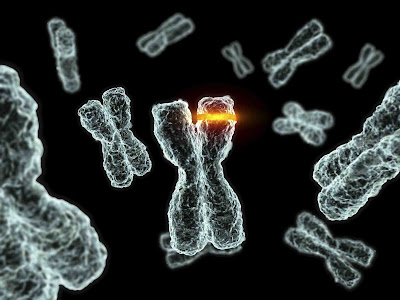 A team of researchers, including the Wellcome Trust Sanger Institute's Yali Xue, report using next-generation sequencing to determine the mutation rate of human DNA, according to Scientific Blogging. The researchers studied an area of the Y chromosome of two distantly related Chinese men — their most common ancestor lived 200 years, or 13 generations, ago. From next-generation sequencing followed by Sanger sequencing, they saw that the two Y chromosomes were different at four of the 10,149,085 loci examined. From that the researchers determined that the mutation rate for humans is one in 30 million nucleotides per generation. "The amount of data we generated would have been unimaginable just a few years ago," Xue says. "But finding this tiny number of mutations was more difficult than finding an ant's egg in the emperor's rice store." The team's work will appear inCurrent Biology.

Posted by redpups at 7:54 AM No comments:

Posted by redpups at 5:49 PM No comments:

Permission granted to crosspost!
This is a BIG HEADS UP Wisconsin!!!

BREEDERS RED ALERT AUGUST 18, 2009
URGENT * URGENT * URGENT * URGENT * URGENT * URGENT * URGENT * URGENT *
DFOW has just been notified by a very credible source that between now and just after legislators go back into session floor periods (September 15,2009), the Humane Society of the United States will be orchestrating a breeder bust.
If you have been listed in a breeder directory, have shown your dogs or have advertised a litter in any publication in the last nine years you must be on your guard at all times. Do not allow anyone into your home without a search warrant. In the State of Wisconsin, Animal Control officers and HSUS do not
have police powers. They must be accompanied by law enforcement (although some law enforcement officers are also animal control officers) with a search warrant in order to enter your premises. If HSUS is working in conjunction with law enforcement and there is a search warrant, you must cooperate. DO NOT SIGN OVER ANY OF YOUR DOGS if threatened. Do not believe those that state that the charges against you
will be lessened if you sign over your dogs. Video tape the entire proceedings. If you are detained asking questions while a search is going on, have another individual available to video tape or photograph the proceedings. Ask for proof of identification. Get names and license plate numbers for those coming onto your property. Some breeders have had to get special permits in order to have more than the arbitrary number of allowed animals in their community and have had to waive
their constitutional rights in order to get those permits. If you are in this situation, you must contact a lawyer and find out what your rights are TODAY. If animal control or law enforcement come to your door, walk out of your door and shut it behind you. Do not allow them to enter your home you go out to them unless they have a search warrant. Please read the article What to do when animal control comes knocking
http://www.dpca. org/BreedEd/ when_animal_ control_comes. htm for more details. If anything seems amiss, make notes of dates and times, take names, get witness names, what they did, take photos, and keep a log of suspicious activities. We often hear fanciers state that this issue will never affect me when it comes to breeder licensing legislation. There have been at least
4 situations that have already happened in OUR STATE since the beginning of the year and breeder licensing requirements have not yet been passed into law. The orchestrated bust that we were warned about today could very well be targeted at any one of us. You must protect yourself against false accusations. This is a very serious situation. If you truly believe in preserving the future of your chosen breed or breeds, you must do everything
in your power to protect those breeds and their heritage. Insist on the preservation of your constitutional rights.
Cross posting is allowed.
Tracey Johnston
DFOW Vice President
Posted by redpups at 10:32 AM No comments:

North Dakota training update!
We are having a decent amount of birdwork at Dr. Boser's training grounds. The weather the past couple of weeks was unseasonably cool, and as a result we have been able to get some good conditioning on the red dogs! This week the weather has warmed considerably, more like "normal" North Dakota weather in August. Today we broke dogs away at around 6:30 am and the temp was around 55 degrees... it is currently 95 degrees at 3 pm! Back to normal! It's supposed to cool down a bit by the weekend, hopefully.
We've been hitting a fair number of both pheasants and chickens, haven't seen any huns yet this year, which is a shame because I love to see the young dogs' eyes bug out when a covey of huns comes up!!
Another week and I have to head back to Ohio and back to work... here's a couple of videos of some ND action from earlier this week...
This is my young Shooting Dog "Ruby" running with one of Dr. Boser's derbies... getting a snoot full of wild bird action!
Two of Dr. Boser's young Shooting Dogs (Touchstone and Jericho) work some prairie birds one morning. This country is about 50 miles southwest of Bismarck, west of the Cannonball River, near Flasher ND
Some red setter puppies out of Dr. Boser's red setter "Breakstone"... about 6 weeks old, on a walk to get the mail at the road...
Posted by redpups at 1:41 PM No comments:

We are up on the prairies of North Dakota for a few weeks to work dogs with Dr. Boser. The bird count is down this year, but we are still getting 6 to 8 contacts per hour on the average. The weather is unseasonably cool, with temperatures in the 40s and lower 50s in the early mornings, and sometimes never getting higher than the 70s. Most of the wheat crop is still green, and ranchers are saying the harvest is about 3 to 4 weeks behind schedule. We are seeing both pheasants and chickens, in about equal numbers in our area (southwest of Bismarck, in the Flasher area).

Here are a couple of videos I took this morning... sorry about the quality... its hard to ride a horse and hold an ecollar and camcorder all at the same time!

Roger Boser and Al Fazenbaker work a couple of young dogs on a pheasant. The yellow collar dog is a derby of Dr. Boser's... the darker dog is Roger Ramjet, who will be a 1st year SD with Al.

Posted by redpups at 1:23 PM No comments: