Received a couple of pics from NRSFTC member Craig O'Brine in Washington state. The club had a get-together this fall and worked their red dogs. Thanks Craig for sharing! 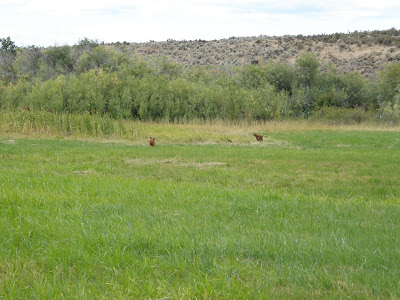 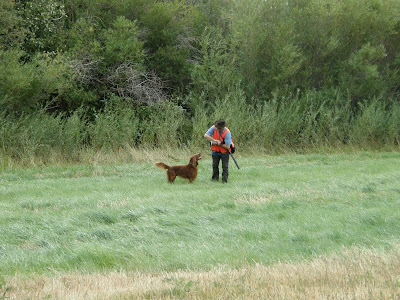 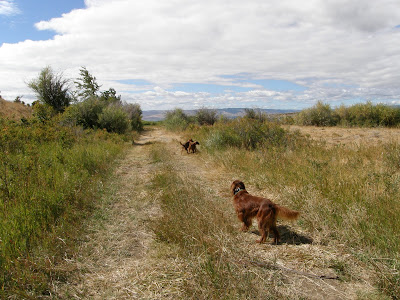 Posted by redpups at 1:37 PM No comments:

A Great Red Setter Has Passed... 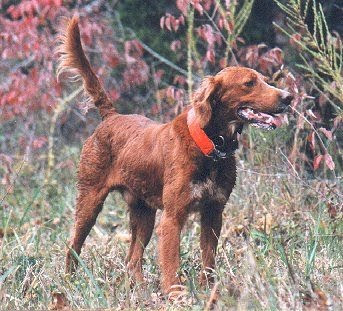 We received notice today that the great red setter Ch. Prosper passed away on December 2. He was 15 years of age. "Jimmy" had a long competitive career amassing a total of 85 placements including 6 championships and 6 runnerup championships. His most notable win was the Region 2 Am Shooting Dog Championship in 2001. After the initial series of 53 entries the judges could not agree on the order of placement between Prosper and a pointer so they decided the only way to settle it was with a second series. After 45 minutes, when Prosper had racked up 5 perfect finds to none for the pointer the doubting judge said "I`m convinced; put the rope on him." 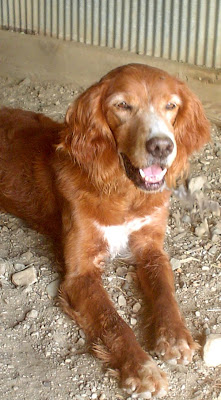 Prosper at age 13 on the North Dakota prairies

Prosper was a very wide running dog who would always show to the front. And, above all, he was a bird finder. I remember well training on the prairies one summer when Prosper was in his prime. Dr. Boser and I had been running derbies for much of the morning, and we hadn't found a single bird. The weather was hot, and we were heading back to the horse trailer to call it a day. When we got back to the trailer, we decided that we couldn't head back to camp without any birds. So, Roger put Prosper on the ground, the same grounds we had just run 2 braces of derbies through with no birds. Prosper had 4 finds in 30 minutes, and was wide and moving forward when Roger went to reel him in.

Prosper was a genuine bird dog, who lived to hunt and work for his boss. He was truly one of the great ones. The National Red Setter Field Trial Club extends condolences to Dr. Roger and Mary Boser. The great ones always seem to leave us too soon. 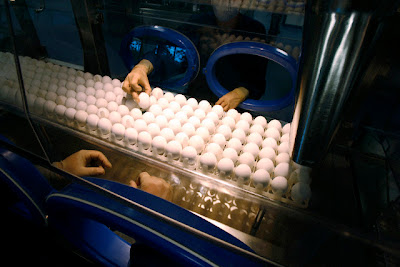 Most vegans, evolution deniers and right-to-lifers, are more than happy to be healthy hypocrites.The reason:
Most vaccines are made from animal tissue. Seasonal Influenza vaccine, for example, is made from hundreds of millions of embryonated chicken eggs -- one fertile chicken egg for every vaccine dose. Monkey, pig, and guinea pig cells are used to culture various other vaccines.
In the future, flu vaccine may be made from Armyworm tissue.
Several important vaccines are cultured on human fetal tissue obtained through voluntary abortions in the 1960s. Vaccines cultured on various strains of human fetal issue include vaccines for Hepatitis A, Hepatitis B, Chickenpox, Polio, Measles, Mumps, and Rubella. All Chickenpox, Hepatitis A, and Rubella vaccines are derived from human fetal tissue cultures.
The very idea of seasonal vaccines is an admission that things evolve. In the case of influenza, this evolution is so rapid and predictable that science can normally create the next vaccine in anticipation of the next evolutionary turn of the virus.

from The Terrierman website http://www.terrierman.com/
Posted by redpups at 8:07 PM No comments: 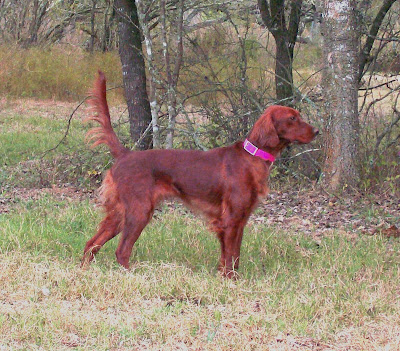 Congratulations to Brownhaven Steel Magnolia, aka "Rachel" who recently took the blue in a 16 dog Open Gun Dog stake and finished her Field Championship. Rachel is now a Field Champion, Amateur Field Champion, and also was the RU 2009 ISCA National Champion. Best wishes to Rachel and her owner Jim Baker as well as her handler Sherry Ebert.
Posted by redpups at 6:48 PM No comments: