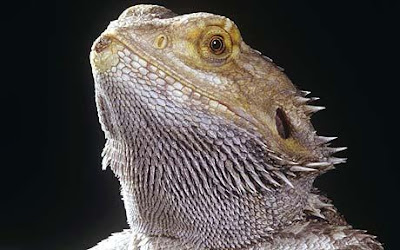 If you're worried about the popularity of your breed, worry no more... reptiles like snakes, geckos and bearded dragons have become such popular pets that they now outnumber dogs, new research has found. Calculations by the British Federation of Herpetologists (BFH) indicate that there are now as many as eight million reptiles and amphibians being kept as pets in the UK. This compares to an estimated dog population of 6.5 million.
The growth in reptile numbers is so rapid that within years they will overtake the country's nine million cats to become Britain's most popular pets.
Chris Newman, chairman of the Federation, said: "There are now, without question, more pet reptiles than pet dogs in the UK. You only have to look at the way the market has grown. I have no doubt that there are now between seven and eight million reptiles living as pets in the UK.
"Reptiles' popularity as mainstream pets has grown immensely. There has been an explosion in numbers. They have moved from being niche to being mainstream.
"They are far more suitable as pets than are animals which are perceived as more traditional pets, such as cats, dogs and small mammals. Reptiles fit today's modern lifestyles as they are less time-consuming, and can also be easier to keep, than other traditional pet species."
Reptiles are relatively cheap to buy and to keep, Most are kept in heated tanks for at least part of the day. They require less upkeep than other caged animals, as the little waste they produce is solid and dry. Breeders believe that well-known reptile owners such as Jonathan Ross, who owns an iguana, have added to booming sales.
The population has been calculated through analysis of suppliers of reptile food – insects and mice.
Since 2004, when the reptile population was recorded at five million, the number of crickets being sold in the UK has doubled from 10 million a week to 20 million.
Over the same period, the number of locusts produced has more than quadrupled, to around one million a week.
Sales of frozen rodents have also increased dramatically. In addition to the rodents bred for the purpose in the UK and EU, around 3.5 tons of frozen rodents are being imported from outside the EU each month.
In 2004, reptile products made up only four per cent of the UK sales of Hagen, a major pet food company. They now account for 17 per cent.
The five most popular species are leopard geckos, bearded dragons, corn snakes, royal (or ball) pythons, and Hermann's tortoises.
Other popular species are the colubrid snake, veiled chameleon and crested gecko. The latter was only rediscovered in 1994, heaving been thought extinct for many years. By 2004, it was the fifth most commonly bred lizard in captivity.
The largest snakes being kept as pets are thought to be Burmese pythons, constrictor snakes which can grow up to 20ft in length.
The biggest lizards are water monitors, which can reach sizes of up to 7ft.
Venomous snakes can also be kept, although owners must have a licence from their local authority.
The new figures also include pet amphibians – mostly newts, frogs and toads – although these are thought to account for less than ten per cent of the numbers.
Mark Johnston, from the British Small Animal Veterinary Association, said: "In the last five years, we have seen an increase in reptiles. There are certainly more people keeping them. We rarely treat them for diseases, because they are usually kept in isolation, but we do see them for problems about the way they are kept and cared for."
Since last year, Christine Sands, 57, and her son Ryan, 17, from Kirkleatham, Cleveland, have jointly own a bearded dragon, called ZZ.
"She is very sociable and tame," Ms Sands said. "She will sit on my lap watching the telly and then jump down and run around the room. She seems to get on well with my cats too. But the heating and lighting in her tank mean she has probably caused my electricity bills to go up."
Daniel Catcheside, an 18-year-old student from Portsmouth, owns a bearded dragon, Merlin, a turtle, Vern, and two tortoises, Fudge and Big George.
"They are remarkable animals and all make great pets," he said. "They have all got different personalities. I have a dog too which is fascinated by the tortoises. In the summer, they will lie next to each other."
Posted by redpups at 5:40 PM