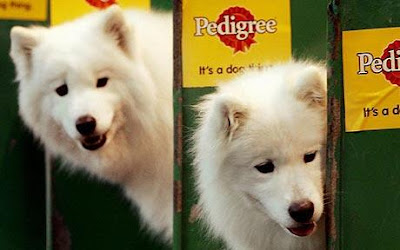 By Anita Singh at Telegraph.co.uk
The future of Crufts is in doubt after the show's sponsor, Pedigree, pulled its sponsorship after 44 years. The move could spell disaster for the show, which has been embroiled in controversy since a BBC documentary claimed that Crufts supports unhealthy breeding practices which lead to disease and deformities
Last month, the RSPCA severed its ties with the event, claiming that Crufts' emphasis on pure breeds was "morally unjustifiable". The BBC may not cover next year's show.
The Pedigree deal was worth £500,000 per year. A brief statement from the brand's parent company, Mars, said: "After careful consideration, Pedigree has decided to withdraw its sponsorship of Crufts. The Pedigree brand has evolved and we are prioritising initiatives that support the broadest possible community of dog owners such as our successful programme to help homeless dogs - The Pedigree Adoption Drive - and our online service for breeders. We look forward to working with The Kennel Club on other projects in the future."
Pedigree's one-time slogan was "top breeders recommend it", but the BBC documentary, Pedigree Dogs Exposed, highlighted the life-threatening genetic conditions in many of Britain's five million pedigree dogs including popular breeds as the bassett hound, German shepherd, bulldog and pug.
Hat's off to Pedigree Dog Fodd and its parent company, Mars. The only way to stop the 100 year trend of show breeding, which has destroyed virtually every working breed that has entered the show ring, is to cut off their ability to engage in useless conformation-only breeding. I hope other dog food companies step up to the plate, especially here in the United States.
Posted by redpups at 8:17 AM