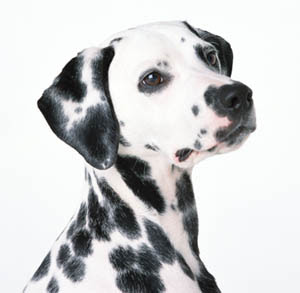 It is not only the red setter that has undergone a restoration by utilizing crossbreeding as a mechanism to bring the needed genetics into the breed. The Dalmation Heritage Project is an ongoing project by a group of dedicated Dalmation breeders, who are using crossbreeding to English Pointers (the closest relative to the Dalmation), as well as other breeding and health-positive techniques, to improve the quality and health of their breed. As most of you who read this blogsite are well aware, I am a staunch opponant of strictly closed registries such as the AKC. I am also a strong advocate of revamping our registries to modernize them and make them better aligned with contemporary advances in canine and population genetics. The Dalmation Heritage Project is a perfect example of how genetics, breeding, and pedigree registration can be blended to present a useful and functional tool for recording breed records, yet also act as a helpful guide for breeding healthy working dogs.
Be sure to visit the website of the Dalmation Heritage Project at http://www.dalmatianheritage.com/index.htm

A Special thanks to James Seltzer for providing permission to post this information on our blogsite. Please feel free to copy and paste to anyone with an interest in breeding healthy working dogs.

Dr. Seltzer first shared this information with members of ShowDals, an online list for Dalmatian breeders and owners, in June 2006.
Dr. Seltzer has been a member of the Dalmatian Club of America since 1976. He bred Dalmatians under the Willowind kennel name. The Willowwind website can be found at: http://users.nbn.net/jseltzer/