Dogs, Cats May Be Heart Healthy

After reviewing the literature, writing chair Glenn N. Levine, MD, a professor at Baylor College of Medicine in Houston, and colleagues found that having a dog or cat in one's life was associated with beneficial cardiovascular effects, including:
The studies are by no means definitive and do not necessarily prove that owning a pet directly causes a reduction in heart disease risk, researchers emphasized.
They concluded that the data supported a possible association between pet ownership and decreased cardiovascular risk. "We saw the most robust data for dogs helping to increase their owners' exercise ability," Levine told MedPage Today.
And although randomized data on this topic are scarce, Levine and colleagues concluded that a causal link may exist between pet ownership and decreased cardiovascular risk -- again, the data being more robust for dog ownership.
The investigators noted two randomized trials in their evaluation. One of them randomized 30 people with borderline hypertension to either adopt a dog from a shelter or defer adoption.
At 2 and 5 months follow-up, the group that adopted dogs had significantly lower systolic blood pressure. When all participants had adopted a dog, the drop in BP was similar between the two groups (Abstract presented at 22nd Annual Scientific Sessions of the Society of Behavioral Medicine; March 24, 2001; Seattle, WA.).
The second study randomized 48 hypertensive stockbrokers to dog or cat adoption or no adoption. Researchers wanted to gauge the level of stress reduction. Compared with nonpet owners, the pet owners demonstrated significantly "diminished increases in systolic and diastolic blood pressure, heart rate, and plasma renin activity when exposed to mental stress at 6 months" (Hypertension 2001; 38: 815-820).
The data on pet ownership and hyperlipidemia is sparse, but trends toward modest reductions in total cholesterol for pet owners.
Studies looking at obesity and pet ownership have been conflicting because of several factors including type of pet, different patient populations, and how much interaction there is between owner and pet, researchers said.
However, "dog walking, as opposed to pet or dog ownership, does appear to be associated with a lower incidence of obesity," they noted.
Finally, in people without cardiovascular disease, pet ownership did not appear to have an impact on survival. In contrast, dog ownership in those with established heart disease was strongly associated with decreased mortality, with the likelihood of mortality being four times greater for those who did not own dog.
Based on the evidence, the AHA recommends that pet ownership, particularly dog ownership, may be reasonable for reduction in cardiovascular disease risk (Class IIb; Level of Evidence B).
A second recommendation states that pet adoption, rescue, or purchase should not be done for the primary purpose of reducing cardiovascular disease risk risk (Class III; Level of Evidence C).
In conclusion, the authors state, "Further research is clearly needed on this important topic, including studies of risk factor modification, primary prevention, and pet acquisition as part of a strategy of secondary risk reduction."
Posted by redpups at 6:03 AM No comments: 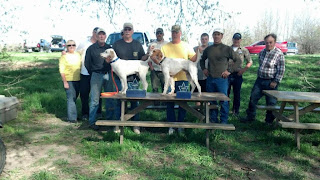 Al & Ed traveled up to Clinton Ontario to judge the Region 13 Amateur Walking Shooting Dog Championship... had a great time... the club treated us like royalty... big thank you to Spencer Ray of Creek Haven Ranch  http://www.creekhavenranch.com/index.php

Congratulations and thanks for a great weekend!