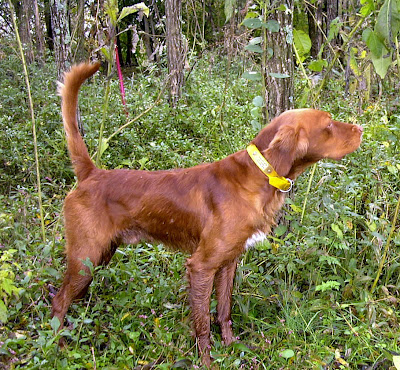 Code Red
Silver Creek Kennels
I like a dog on the "edge"... that dog that is under control, but "just barely"... that dog that hits the edges up front, and hangs on to those edges, but "just barely... a dog that sticks his birds, and you're thrashing to get that bird up, thinking, that damn dog is quivering like a banshee, and hanging on, but "just barely... when you have a dog like that, you've got yourself a serious bird dog. That's what Charlie Turner has with Montana's Full House. Congratulations to Charlie, to and to Tim Hammons, who handled "Montana" to a first place finish in the Amateur All-Age stake of the Kentucky Field Trial Association. And, just to keep the white dogs humble, Tim also handled his big running red setter Code Red to a second place finish in the Amateur Shooting Dog stake. Code Red is no slouch either, as the reporter noted that "Code Red had two finds and a big race, at times a little wild, having to be roped in by his handler occasionally." Just barely.

That's what makes a champion... just barely.
Posted by redpups at 4:59 PM