This posting was taken from the Terrierman.com blogsite... thanks to this great site for all the work they do promoting the working dog! This posting has been edited to align with red setter objectives...
Of the thousands of Irish setter owners in the United States, most do not breed dogs, and that is a good thing. I am not particularly enammored with those that do, as most have no idea of what they are doing, do not work their dogs at all, and essentially treat the whole thing as a lark -- or a way to move up in the "pecking order" of the show-ring community. Breeding dogs is not a sport, and if you are not working your dogs a lot, please do not tell me you are breeding working dogs or have the slightest idea of what is needed in a working dog. In fact, when it comes to working Irish setters, you are probably the problem! You are the reason the dogs are getting too big, do not have good noses, and are (increasingly) stupid, especially when it comes to bird intelligence. Please, do NOT confuse the Junior Hunt test with real work. The fact that a dog can run 50 ft., flash point a planted quail 6 inches in front of its nose does not mean you have a dog worth breeding! I am happy that you are at least doing something with the dog, but this is the most minimum of beginnings. If you were looking to breed a running horse, surely you would ask more than an ability to trot?? The idea that most show-ring Irish setters are a load on the gene pool of their breed is so alien to the average breeder that they do not understand the words, much less the phrase. If a dog looks fine it is fine -- never mind that it does not use its nose, has no gait, cannot work a running pheasant, and has enough feathering to choke a horse! Never mind that the breeder is a man or woman with so little mucle tone he/she could not plant a dozen tulip bulbs, much less go on a four to eight hour hunt in prime pheasant or grouse country! In the world of Irish setters, the end result of such selection and breeding are the over-large, brain-befogged dogs we see in the show ring today. Their owners do not take them hunting or trialing (much less anything else), but they will tell you they are great at barking at song birds outside the picture window! Doing it wrong (and lying to yourself) is simply too easy, while doing it right demands a ferocious level of sustained committment. 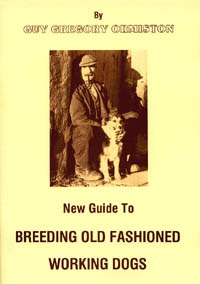 That, it seems is the subtext of a little 46-page booklet entitled "The New Guide to Breeding Old Fashioned Working Dogs" by Guy Gregory Ormiston. I do not own this tract, but a friend sent me some quotes from the publication, and I have found them sufficiently interesting to append them below. The complete work can be ordered for $15 USD (includes worldwide postage paid) from Guy G. Ormiston, Rt.1, Box 181-G, Wynnewood, Oklahoma, USA 73098. Mr. Orniston raises blue-tick hounds, but the principles of raising all working dogs are largely the same, and the booklet comes highly recommended.

"To become wealthy you would have to sell dogs in volume and that is contradictory to one of the secrets of breeding outstanding working dogs. SECRET: Constant sorting of brood stock is necessary to prevent regression to average performers. You cannot mass-produce sound brood stock."
"You must be a USER of your own brood stock…You could not cull out the lesser dogs unless you used them under fire, identifying their weakness."
"Mental traits are inherited exactly like physical traits!"
"Line breeding and inbreeding will have to be used to maintain any excellence you wish to keep in your strain (but) Never, never, make a cross based solely on compatible pedigrees." [The author goes on to recount his method of developing your own separate strains for the eventually needed outcross.]
"Breed only based on the abilities of the present couple before you. Working ability is an absolute necessity but secondary to soundness and courage. Care must be taken to never double up on a weakness, but always double up on strength."
"If the progeny prove inferior, the animal is removed from the breeding program."
"NEVER UNDERESTIMATE THE IMPORTANCE OF WORKING QUALITY IN YOUR BROOD BITCHES. JUDGE A SIRE ONLY BY HIS GET."
"To produce a credible strain of working dogs… you must breed dogs that will almost train themselves. They must be dogs that can rise above everything from limited exposure to work/training, to neglect, to abuse, and still make some fashion of a functional working dog. I would say only one potential user out of a hundred is a "real" dog trainer… a person who, first, will take the time to properly train a young dog and, secondly, knows how to go about it… a rare find indeed… Out of a litter of ten pups to a random sampling of users, only about two of those pups would have a fair chance of receiving a proper chance to perform their heritage."
"If you have something good in the way of a working dog strain, constant wariness is required to avoid losing it."
"Many a poor soul embarks on a breeding program, with no chance for success simply because this person cannot recognize a top working dog and, therefore, is unable to make intelligent breeding selections. One must study dogs, live with them in the working environment, succeed or fail based on their competence before one can recognize a top performer. Usually these sessions of learning must be lonely vigils."

Joe Edwards of Come Back Red Setters (shown here with his red setter Champion Come Back Audie) is a true working breeder. All the points noted above? That's Joe Edwards. He doesn't play... he works hard with his dogs and his breeding program. Joe doesn't just "talk the talk"... he "walks the walk." Guess what? Joe Edwards has produced more red setter champions than any other single breeder in the United States. And by the way... he's never run a Junior Hunt test, and he's never produced a "bench champion." Go figure... how'd he do it?? How about 40+ years of effort.