Mackey Makes It Three In A Row! 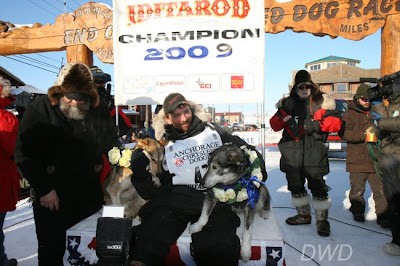 Lance Mackey with his lead dogs "Maple" and "Larry" at the finish line!

In 2008, Lance Mackey proved the impossible was possible again. Today, (March 18, 2009) Lance Mackey made an indelible mark on the Iditarod Trail Sled Dog Race, and on his legacy as an Iditarod Champion. The Fairbanks Alaska musher arrived in Nome Alaska at 11:38:46 am under a blue sky with thousands of race fans cheering him on. Mackey (Bib #47) made his way under the burled arch with 15 very happy, healthy members of his team. Mackey now joins the legendary Susan Butcher and Montana musher Doug Swingley as having accomplished three consecutive Iditarod Championships. He created an impressive gap between himself and the rest of the pack that has not been seen since 2001. This win was, in a word, “impressive.” Mackey set the pace in the 2009 Iditarod after taking his 24 hours in Takotna. From that point forward Mackey’s teams runs were blistering. He passed all of his competitors and grew his lead each step of the way.
Alaska Governor Sarah Palin called to congratulate Mackey on his three-peat. Iditarod Principal Partner Anchorage Chrysler Dodge owner Rod Udd was on hand to present Mackey with his third Dodge Ram Quad Cab Pick-up truck in a row. Principal Partner Wells Fargo’s Representative Loren Prosser presented Mackey a check for $69,000. In addition, Principal Partner ExxonMobil’s Representative Bill Brackin, and Principal Partner GCI’s Representative, Gary Samuelson presented Lance with the garland of roses for his two lead dogs Maple and Larry. 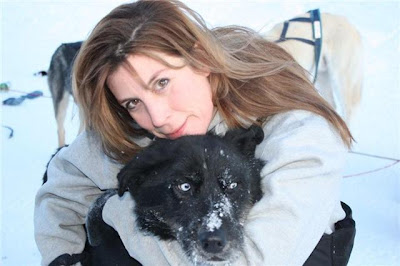 Very cool win for Mackey. I've been watching the race coverage in Versus. Those dogs are extremely impressive in what they do, not to mention the mushers themselves. Mackey showed a lot of determination and had his team ready for this years race. From what I saw I don't think anyone could have beaten him this year.