BEARCAT FOR THE HALL OF FAME

If there was ever a dog that deserved consideration to the Hall of Fame, it certainly is Bearcat. Not simply because Bearcat has the most field trial placements in the history of field trialing in the United States, although he does. Not simply because he was a phenomenal bird finder on both the northern prairies as well as the plantations of the south, although he was. Not because he provided so much pride for his owner Roger Boser and his breeder Joe Edwards, as well as the National Red Setter Field Trial Club, although he did. So why should Bearcat be a part of the Hall of Fame, alongside the likes of Count Gladstone IV, Fiddler’s Pride, Guard Rail, Miller’s Silver Bullet, or Grouse Ridge Will? It’s quite simple. Bearcat delivered performance and production.

Bearcat, bred by Joe Edwards of Goldsboro, NC, out of Come Back Choo Choo x Sugar Plum Christmas, was trained and handled by Dr. Roger Boser of Seven Valleys, PA. His career spanned placements from New England to Georgia. All in all, Bearcat garnered a record number of 158 placements including 14 championships and 8 runners-up. Overall, Bearcat placed in 61% of all trials entered.

Even more impressive is the impact that Bearcat has had on the quality of red setter field trial performance. His son Desperado was but one of many future champions who ran with Bearcat blood coursing through their veins. Of the many fine red setters who have made an impact on our breed, I am hard pressed to find a specimen who has made a greater impact than Bearcat.

The red setter is considered by most to be a “minority breed” in the field trial world. Certainly, in terms of sheer numbers, we fall far below the English Pointer and English Setter. But is not the Hall of Fame about honoring the contributions of a QUALITY bird dog? In the history of any breed of pointing dog in the United States, the number of dogs who have made the impact on a breed that Bearcat has made on the red setter, could be counted with the fingers of one hand… and those dogs are already in the Hall of Fame, as well they should be.

Each morning as I move to the kennels for my early chores, I look with pride at the string of red dogs waiting to greet me. These are true bird dogs, with the style and drive that would make any hunter or trialer proud! The thread that binds them together is their ancestry to Bearcat. The bird dog world is a better place today because of this fine red setter. Let’s honor his legacy by electing Bearcat to the Field Trial Hall of Fame.

We need your help! Please write a letter to the American Field and let the field trial community know how important this fine dog was to our breed restoration. Promoting our great RED ONES is an important part of the Purest Challenge. We need you to make this happen. 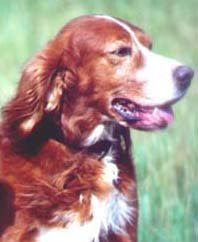 ELECT BEARCAT TO THE HALL OF FAME
Posted by redpups at 6:31 PM