Big Brother has come to the registries. After a series of documentaries last month blasting the KC of Britain for its continuing support of bench breeds and their multiple genetic problems, the KC is now reacting to the storm of public opinion by launching a new initiative designed to "improve the genetic health" of the various breeds. The KC is embarking on a breed by breed review, and also requesting statutory power from the government to regulate all dog breeders in the UK, and to make it illegal for any breeder to sell or breed dogs who is not in compliance with the statutory regulations.
I think it's very ironic that the KC (a closed registry with a major emphasis on bench shows and conformation selection) is now the agency in charge of cleaning up the genetic mess found in many of the bench oriented gene pools. That's like hiring the fox to guard the henhouse! Somebody out there just doesn't get it. It's not the KC... they do get it... look at the baskets of money they will make on this latest scheme. Let's see... the KC sets all health agendas for each breed, controls and regulates those health agendas, obtains punitive measures to eliminate those who don't want to play their game, develops and reaps the profits for the myriad of genetic tests that will no doubt be a part of this scheme, and the money will role in! Yes, the KC does get it... but the general population sure doesn't. Imagine your breeding program being controlled and steered by the regulatory edicts of a closed registry who's major focus is producing dogs who will look pretty in the show ring. What a disgusting and ignoble thought. But, certainly in our current culture, where dogs have been elevated to the status of near human, I think that anything is possible. 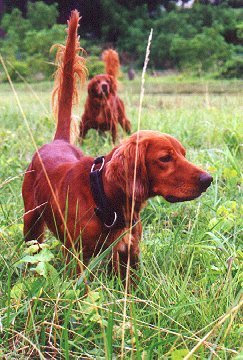 Celtic's Superfund honors a point by Celtic's Sedition. These working dogs are products of the Purest Challenge.

Breed selection should be based upon the breed performance of the gene pool. All dog breeds were created by cultures in the past to do a specific job. And, it's exactly that job that should be driving the selection traits. Furthermore, those traits should be determined by a performance based breeder, one who demonstrates his or her competance by competing with his or her dogs in performance events. Trotting around in the ring with a pretty bow and a handler with some pretty clothes doesn't get the job done. Breeding for those shows in fact is why we have so many breeds with horrible genetic issues... bulldogs with smashed in faces, Irish setters with epilepsy, boxers with heart disease, the list goes on and on. If these breeds were still out there DOING THE JOB THEY WERE CREATED TO DO, those genetic issues would not exist to the extent that they do today, because performance-based selection culls those genes out of the population. For example, the boxer was originally bred to be a fighter, and to hunt and hold large prey such as wild boar or bisen. They should be courageous and furious fighters, with strong prey drive, trainability, physical strength and stamina, and be loyal to their owner/handlers. How many boxers are selected for these traits? Probably less than the number of Irish setters selected for their hunting ability. 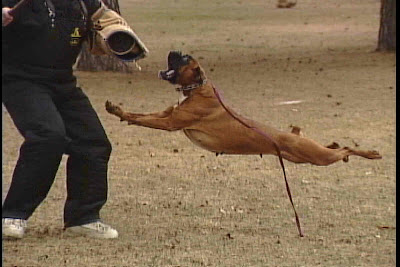 A boxer from working lines attacking during a "courage" test. 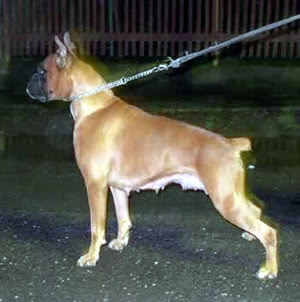 A boxer from the show ring

And that doesn't even address the issue of a dog registry dictating what I want to do with my breeding program. As is typical of most beaurocratic (and clueless) entities, the KC is throwing out the baby with the bath water. In its zeal to control public opinion (and make LOTS of money), the KC will be given a lot of regulatory power that it doesn't and shouldn't have. We don't need more regulation... we need LESS. Maybe it's time for the Brits to have another Boston Tea party... tops on that menu should be the conformation shows. Get rid of them, and let the working canine breeders run the breeding operations, and you'll take care of the majority of the genetic issues out there. And, here's a little message to the AKC, which I'm sure is eyeballing this entire spectacle with a close eye on the possibility of making more MONEY...

from the net reports...

07-Oct-08
The Kennel Club is launching a complete review of every pedigree dog breed in the UK in a move that will have far-reaching benefits for the health of many breeds. It has also called on the government to give it the statutory powers to clamp down on breeders who fail to make a dog’s health their top priority.
A breed health plan will be coordinated for each of the UK’s 209 pedigree breeds and will benefit from the extensive research that has been funded by the Kennel Club in conjunction with renowned veterinary research centres over the past 40 years. This will include updated breed standards to ensure that no dog is bred for features that might prevent it from seeing, walking and breathing freely. Judges will be fully briefed on the new breed standards so that only the healthiest dogs are rewarded in the show ring.
The Kennel Club is releasing the first of these new breed standards today, for the Pekingese, and has taken a tough line with the breed following extensive and abortive consultations. This is set to radically improve the health of the Pekingese which for nearly a hundred years was bred to have a flat face; a feature which can lead to breathing problems; under the new health plan the breed will be required to have a defined muzzle.
The breed health plans, which are scheduled to be completed by early next year, will also incorporate the results of a thorough, ongoing analysis of the health status and genetic diversity of each breed, drawing on results from the world’s largest dog health survey, conducted by the Animal Health Trust and funded by the Kennel Club Charitable Trust in 2004. This will ensure that breeders and buyers are aware of the health tests that should be carried out for each breed. The final part of the plans will look at ways breeders can expand the gene pool of the breed.
In order to ensure that the plans are effective and reach all dogs, the Kennel Club has called on the government to give it statutory powers to make its established Accredited Breeder Scheme compulsory throughout the country. If successful, this would mean that all breeders who are not part of the scheme and who have not officially confirmed their willingness to follow the health standards set by the Kennel Club would be unable to produce or sell puppies within the law.
Additionally, breed clubs are now required to adopt the Kennel Club’s Code of Ethics, to ensure that their practices fall in line with Kennel Club policy for putting the health and welfare of puppies first. This includes a clause that explicitly forbids the compulsory culling of healthy puppies.
To complement these steps the Kennel Club is developing plans for a new Canine Genetics Centre. This will be run in conjunction with the Animal Health Trust, confirming the Kennel Club’s commitment to research into inherited diseases and the provision of DNA testing programmes which identify the genes underlying inherited health problems.
Caroline Kisko, Kennel Club Secretary, said: “The groundswell of public attention on the very important matters surrounding dog breeding is a welcomed momentum that will enable us to drive through, with added urgency, new and extended initiatives that will help to safeguard the health of our pedigree dogs. We have been listening and agree with the general public’s view that more needs to be done.
“Steps such as our breed health plans will enable us to ensure that the health of every dog is the number one priority and we are taking a tougher line with breed clubs by adjusting those breed standards that fail to promote good health. By asking the government for statutory powers we will be able to take a tougher line with all breeders and breed clubs that fail to abide by our high standards. This in turn will enable us to extend the reach of our Accredited Breeder Scheme, which is the quality control mechanism within our registration process, so that all dogs will be bred by people who abide by our stringent rules and regulations for the breeding of healthy, happy dogs.
“We have been working hard in recent years to identify and address health problems that exist in dogs, and we are taking advantage of the opportunities that advances in science have given us to improve dog health. We look forward to continuing our work with various institutions and organisations that share the same objective: to protect the health and welfare of all dogs.”
Posted by redpups at 6:51 PM