Top breeder says Kennel Club is in denial over 'deformed' dogs
A leading dog breeder has accused the Kennel Club of being "in denial" over the health problems caused by the inbreeding of animals for shows including Crufts. 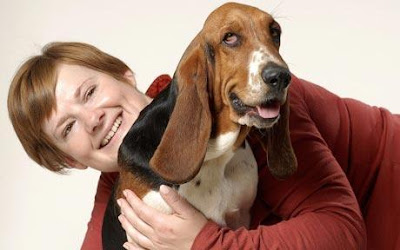 Alison Jeffers and one of her working Basset hounds

Alison Jeffers, who breeds Basset hounds, said the Kennel Club, which organises Crufts, needed to face up to the problems and take "urgent action".
Ms Jeffers, who has a pack of 30 hounds which are not inbred, said: "Our dogs are in good health and can work all day covering 25 to 30 miles.
"But the Bassets bred for shows like Crufts are so inbred that most are incapable of being working dogs even though they win prizes in that category."
"They weigh 35-40kg compared with our dogs' 20kg. They have very short legs, skin, ear and eye problems and suffer from arthritis, and yet judges turn a blind eye to all of that as if it is irrelevant.
"The Kennel Club and many breeders are in denial. They have to admit the scale of the problem and take urgent action to solve it."
The criticism from a leading breeder adds to the pressure on the Kennel Club to introduce compulsory health checks for show dogs, curb inbreeding and limit the number of times a stud dog can be used as a "sire".
Last week the RSPCA severed its links with Crufts - the Club's biggest and most prestigious show - after a BBC documentary revealed how inbred dogs had won prizes at Crufts despite suffering serious health problems.
Ms Jeffers set up the Albany Bassets after she was expelled from the Kennel Club's Working Branch of the Basset Hound Club in 2002 for criticising the inbreeding that, she claimed, meant Kennel-club registered bassets could no longer work in the field.
"The Kennel Club-registered basset hound had developed into a ponderous mutant incapable of hunting so we had to outcross," she said.
"The Club took umbrage at this and expelled us, an easier option than admitting to the fact they had ruined the breed."
The Government warned that it was planning to force commercial breeders to begin "programmes aimed at the eventual eradication of traits that cause unnecessary suffering in dogs".
Ministers are holding talks with the Kennel Club, dog welfare groups and veterinarians on the issue but want breeders to take the initiative in the meantime and start breeding out those traits, said a spokesman for the Department of the Environment, Food and Rural Affairs (Defra).
The BBC documentary revealed that prize-winning dogs suffered from a range of serious conditions as a result of inbreeding.
They included a Cavalier King Charles spaniel with a skull too small for its brain and a Best in Show 2003 Pekingese bred to have a perfectly flat face and subjected to an operation to enable it to breathe.
Pugs, boxers and bulldogs also had health problems caused by inbreeding, including female dogs bred with their male offspring.
The RSPCA urged the Kennel Club to halt the breeding of "deformed and disabled" show animals.
The Dogs Trust, Britain's largest dog charity, has also withdrawn support for Crufts over the breeding techniques.
Clarissa Baldwin, the trust's chief executive, said the Kennel Club officials must review breed standards to ensure that the dogs' health was the priority rather than appearance and artificial breed standards.
Ms Baldwin urged Defra to bring forward laws to regulate dog breeding.
Beverly Cuddy, the editor of Dogs Today, said the Kennel Club was an old-fashioned and out-of-touch organisation governed by arcane rules.
"It has to reform ," she said. "Breeds are under threat. The Kennel Club has to take the criticism on the chin and get on with it. Kennel Club registration should be a mark of a dog's health and quality. We have got to get back to that."
The Kennel Club, founded in 1873, has lodged a complaint against the BBC programme with Ofcom, the broadcast regulator, and is reviewing its 44-year-old contract with the corporation to televise the show.
Caroline Kisko, a spokesman for the Kennel Club said it had already been approached by other TV companies interested in covering Crufts. "But we have to resolve our issues with the BBC first," she said.
Ms Kisko said the Kennel Club was already funding research into the dogs' health problems but admitted: "We could have started earlier."
She added: "There is no blanket solution. We have to look at it on a breed-by-breed basis."
The Kennel Club was concerned that the documentary had already prompted many puppy-buyers to turn to non-Kennel-Club-registered cross-breeders whose interests were "purely commercial", she said.
The Club had made donations to the RSPCA and felt "betrayed" by the animal welfare organisation. "We helped them and they have stabbed us in the back," Ms Kisko said.

from Telegraph.co.uk
Posted by redpups at 6:50 PM