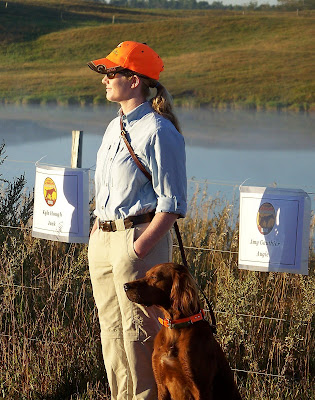 Amy and Augie ready for the big day!

The National Red Setter Field Trial Club is pleased and honored to announce that a red setter has achieved the title of Versatile Champion. BB Augie (aka "Augie") passed the grueling Versatile Title test at the 2008 North American Versatile Hunting Dog Association Invitational held near St. Paul Minnesota August 28 to 31. Handled by NRSFTC member Amy Gauthier, Augie achieved a total score of 191 of a possible 200 points, including a perfect score in water work! Augie is Amy's first red setter, and she sure started out with a bang! Amy is trained as a fish and wildlife biologist and is an avid hunter. She says Augie is an awesome pheasant dog, and he sure showed it with this great accomplishment. Augie is the FIRST RED SETTER in the history of NAVHDA to achieve the title of Versatile Champion. A Versatile Champion has demonstrated the ability to perform as a top level hunting dog, including the ability to hunt and point game birds through the entire sequence of pointing, steadiness, and retrieving to hand. The Versatile Champion must also perform extensive water work, including steadiness at the blind, water searches, and water retrieves. They must also demonstrate high levels of obedience and handling skills, and be biddable to the handler through all phases of the test. Only those bird dogs at the highest level of competence are able to achieve this honor. 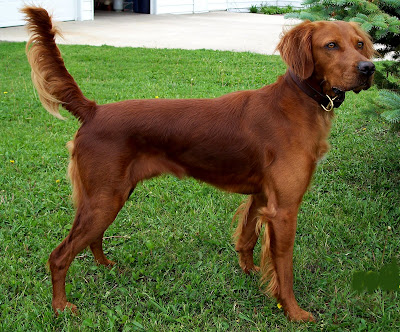 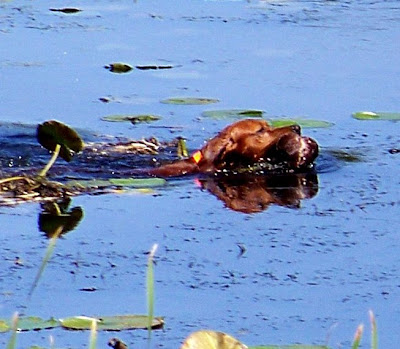 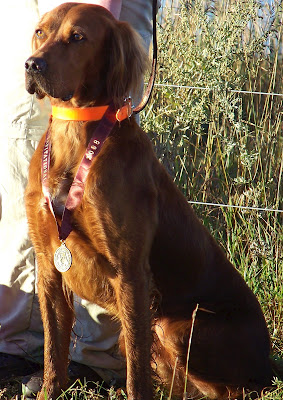 Congratulations to Amy and Augie...

...another piece of the Purest Challenge!!