Pierce and Walker Show Their Stuff !! 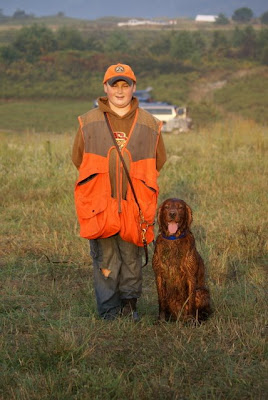 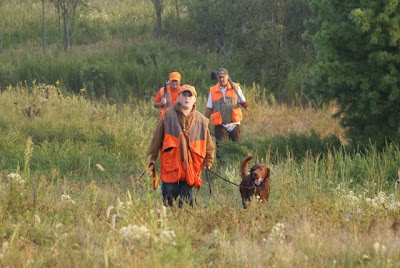 Several years ago I sold a couple of puppies out of one of our litters to a friend and former student, Chris Hall. Chris lives in the Dayton area with his wife and two stepchildren, Pierce and Grace. Chris became heavily involved with NAVHDA (North American Versatile Hunting Dog Association), and not long after he tested one of his red setters (Ryland) to a Prize I UT and became the first person to ever quality a red setter to the prestigious NAVHDA Invitational. 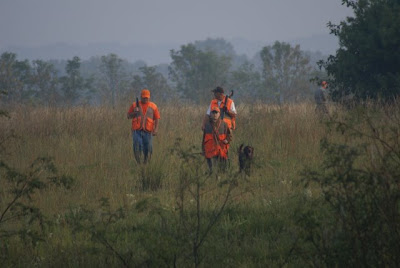 Pierce and Walker head to the bird fields as the morning fog lifts... 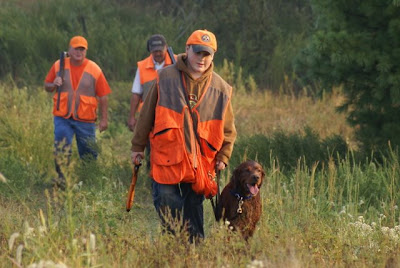 Pierce, his 12 year old boy, like Chris, is also an avid hunter and loves to help out with the dog training. This past weekend, Pierce tested one of the family red setters, Walker, and obtained a Prize III Utility score of 182 points. According to dad, Pierce and Walker put on a show at the Central Indiana 3 day NAVHDA test, earning scores of 3 and 4 in the field and retrieve; Walker's only weak spot was the duck search, where he scored a 2.
Chris said that during one sequence in the field Pierce even crawled under a pine tree to flush a bird. "He did it on his own, I waited patiently at the truck during each event. I was more nervous than him." 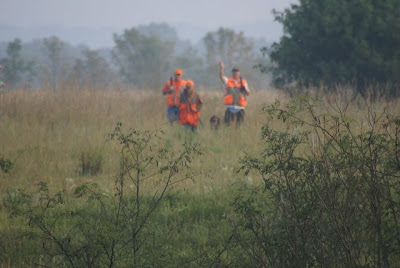 The judging team, headed up by Senior Judge Mark Fraly, was very impressed with this young handler.

Not to be kept out of the picture, Chris tested his old standby, Ryland , to obtain a near pefect score 202 out of 204 Prize 1, to qualfy for the upcoming NAVHDA Invitational.
Chris said, "Thank goodness Pierce got a 3 in healing...I would have never lived that one down!
We had a great weekend, Pierce is already talking about what he is going to work on for next year. I'd say he has caught the NAVHDA bug, hook, line, and sinker."
I'd have to agree... and, it looks like he's caught a "Piece of the Purest Challenge" too! 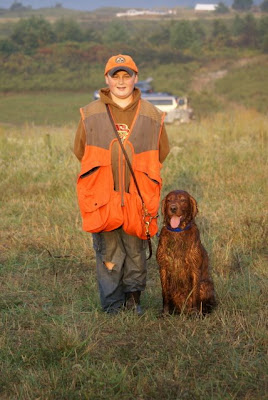 Congratulations to Pierce, Chris, Walker, and Ryland for showing once again how the red dawgs can do it!
Posted by redpups at 6:52 PM