What would mother say?? 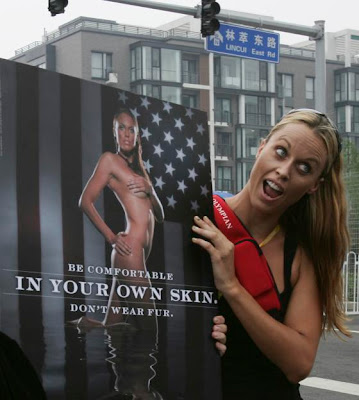 BEIJING - U.S. swimmer Amanda Beard unveiled a demure nude photograph of herself urging women "Don't wear fur" on Wednesday, hours after Chinese authorities had prevented her from her staging a news conference for "safety" reasons.
The Athens 2004 Olympic gold medalist said she was determined to carry on even after plainclothes police banned her scheduled news conference at a Beijing hotel "for our safety."
Beard, 26, declined to say if she believed that was the real motive for the ban.
She went ahead with her campaign, only at a different location. Instead of the hotel, she appeared in front of reporters and TV cameras outside the heavily fenced Olympic athletes' village.
"What happens with animals when their skin is ripped from their bodies when they are still alive, it's heartbreaking for me," she said. The Olympics provided a great platform for making those views known, she added.
Chinese Olympic security guards watched the media scrum from the South Gate of the village but did not intervene. The German Olympic cycling team, heading out for training in hot, muggy weather, stopped for a look.
PETA spokesman Jason Baker said eight Chinese security officials in plain clothes showed up at the group's hotel late on Tuesday to announce the planned press conference would not be permitted. They cited safety concerns, he said.
"I think they just didn't understand what we had planned," he told Reuters. "We are not protesting against China. We just want to promote compassion for animals.
"We know they don't like talking about animal rights. I guess they didn't want to take any chances right ahead of the opening of the Olympics," Baker added.
But there would be no protest, he said. "Five years ago we wouldn't even have considered doing this here."
(From the Reuters wire service)
Posted by redpups at 8:52 PM

I guess if there was anyone that could stop me from wearing fur, it would be Amanda!