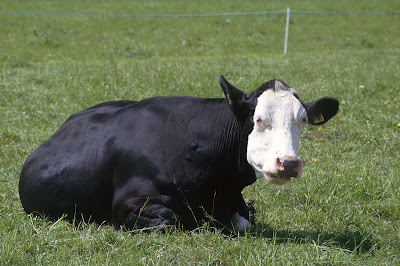 If you like eating dairy products or beef, you need to read this and take some action...

The American Farm Bureau Federation has registered its opposition to an Environmental Protection Agency proposal to regulate greenhouse gases under the Clean Air Act, asserting it would essentially result in new taxes on livestock operations.“Steep fees associated with this action would force many producers out of business. The net result would likely be higher consumer costs for milk, beef and pork,” said Mark Maslyn, AFBF executive director of public policy, in comments submitted to EPA.According to Agriculture Department figures, any farm or ranch with more than 25 dairy cows, 50 beef cattle or 200 hogs emits more than 100 tons of carbon equivalent per year, and thus would need to obtain a permit under the proposed rules. More than 90 percent of U.S. dairy, beef and pork production would be affected by the proposal. The fee for dairy cattle would be $175 per dairy cow and $87.50 for every head of beef cattle.

Cattle and other ruminants produce methane, a greenhouse gas, as a natural byproduct of the animal’s digestive process. However, globally ruminants only account for roughly 26% of methane emissions resulting from human activities. Methane is also produced by landfills (the largest US human-caused source of methane) and the production of natural gas (the second largest US source). Methane is also produced by manure management, treatment of wastewater, rice cultivation, wetlands, and the burning of forests and grasslands. The complex regulatory schemes of the three primary Clean Air Act programs are not suited for regulating agricultural greenhouse gas. The costly burden of compliance could cause many farming operations to cease altogether.The Department of Agriculture’s office writes: Agricultural emissions, the result of natural biological processes, are not easily calculated or controlled. Technology does not currently exist to prevent the methane produced by enteric fermentation associated with the digestive process in cows and the cultivation of rice crops; the nitrous oxide produced from tilling soils; the carbon dioxide produced by soil; and animal agriculture respiratory processes. The only means of controlling such emissions would be through limiting production which would result in decreased food supply and radical changes in human diets.

More information on livestock and methane emission can be found in the following articles:Do Cattle Really Increase Methane In Atmosphere? http://www.cattletoday.com/archive/2008/October/CT1776.shtml

Although the deadline to file comments was November 28, EPA will continue to post late comments. Public input on this issue is critical – please send your comments without delay. Full information and scope of Advance Notice of Proposed Rulemaking: Regulating Greenhouse Gas Emissions under the Clean Air Act is at http://www.epa.gov/climatechange/anpr.html

Comments should be identified with the Docket ID No. EPA-HQ-OAR-0318

Or follow the instructions and submit online at http://www.regulations.gov/search/index.jsp