Dog Vision at Night? Not Bad... 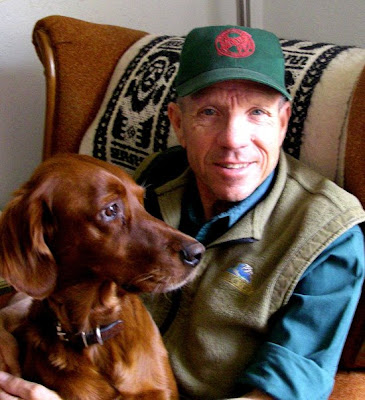 NRSFTC Board Member Tom Norton and one of his red dogs...
Who sees what??
How well do dogs see at night? A lot better than we do, says Paul Miller, clinical professor of comparative ophthalmology at University of Wisconsin-Madison.
“Dogs have evolved to see well in both bright and dim light, whereas humans do best in bright light. No one is quite sure how much better a dog sees in dim light, but I would suspect that dogs are not quite as good as cats,” which can see in light that’s six times dimmer than our lower limit. Dogs, he says, “can probably see in light five times dimmer than a human can see in.”
Dogs have many adaptations for low-light vision, Miller says. A larger pupil lets in more light. The center of the retina has more of the light-sensitive cells (rods), which work better in dim light than the color-detecting cones. The light-sensitive compounds in the retina respond to lower light levels. And the lens is located closer to the retina, making the image on the retina brighter.
But the canine’s biggest advantage is called the tapetum. This mirror-like structure in the back of the eye reflects light, giving the retina a second chance to register light that has entered the eye. “Although the tapetum improves vision in dim light, it also scatters some light, degrading the dog’s vision from the 20:20 that you and I normally see to about 20:80,” Miller says.
The tapetum also causes dog eyes to glow at night.