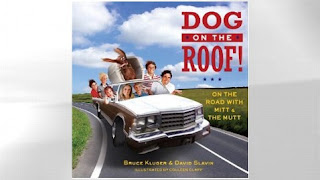 (From ABC News Online)
That infamous and seemingly immortal tale of Mitt Romney crating his dog on the roof of his car during a 12-hour road trip has already weaseled its way into the narrative of the 2012 campaign and is now splashing its way onto America’s bookshelves.
The Romney family’s now-deceased Irish setter Seamus’ story is being cemented in history in a 64-page satirical book, “Dog on the Roof,” set to be released June 19.
And while the story has already incited pet lovers, pestered the presidential candidate and punctuated attack ads, a national book tour devoted solely to propagating the decades-old event will likely reinvigorate the Seamus saga, which Romney has tried to put to sleep.
“Now for the first time, here is the completely true—and only mildly embellished— shaggy-dog story of Seamus Romney,” reads the books description. “It is the inside (well . . . overhead) look at the Man Who Would Be President and the wild ride that’s sweeping—and bewildering—the nation.”
The authors, political satirists and frequent contributors to NPR’s “All Things Considered” Bruce Kluger and David Slavin, declined ABC’s request for comment.
The book is the latest edition to a growing grassroots advocacy movement using the Seamus story to point out Romney’s “overall appearance of meanness,” as Sean Crider, the founder of Dogs Against Romney, said.
“It’s a character illuminating anecdote about Romney for a lot of people,” Crider said. “A lot of people are just pure dog lovers and see what he did as being abusive; others see it as a little window about what kind of guy he is.”
Romney’s treatment of Seamus represents a “pattern” of “meanness” from Romney, he said, that is amplified by the recent controversy over his high school bullying and his comments that he “likes being able to fire people.”
Crider, who is promoting the Dogs on the Roof book to the 55,000 Dogs Against Romney Facebook followers, said the book “makes Romney look silly.”
But while the book is humorous and satirical, he said it communicates a serious issue in a way that people who don’t follow politics can relate to.
“Politics is hard for most people, including me, to keep their head around,” Crider said. “Big discussions about universal health care and the debt issues and all these things are really big and complex for busy people to really be able to wrap their heads around.”
“This thing about Seamus cuts right through all that,” he said.
Posted by redpups at 6:30 AM