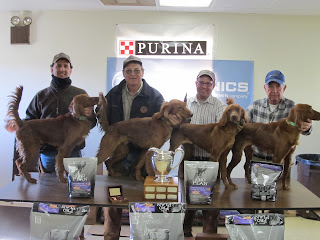 The 2012 Red Setter Futurity winners!
On the far right...
1st Place: Celtic's First Strike, bred by Paul Ober, handled by Robert Ecker.  In the picture is Joe Edwards, owner of the sire of the winner, Come Back Audie.
2nd Place:  Celtic's Signature, bred by Paul Ober, handled by Robert Ecker.   Robert Ecker, holding the bitch, is a well known professional trainer ,and has a string of successful bird dogs working out of his Midnight Kennels
3rd Place:  Colonnade, bred and handled by the veteran red setter trainer Roger Boser.  Dr. Boser and his string of red setters operates out of his Bearcat Kennels outside of York, PA.
4th Place: Cedar Creek Skyliner, bred by Paul Ober and handled by veteran red setter club member Ed Lierman.
Hat's off to long time red setter club member Paul Ober, who was the breeder on 3 of the 4 placements this year!  Congratulations Paul!
Posted by redpups at 5:33 PM