Red Dogs Have A Good Day At NBHA Trial !!

The Long Run Bird Dog Club held an NBHA trial in Berea, KY this past Saturday.   Jim Ashby convinced Lance Culver and Lauren Hensley to enter their dog, Lakeview Timeless Treasure (Dexter) in the puppy stakes for their first field trial event ever. As things happen the day was a good day for "red".  Dexter was first place in the puppy stakes and Jim's puppy Lakeview Rondo Muldoon was second. Dexter is out of a litter of puppies Jim raised in January out of Lucy and Hondo and Rondo is out of a litter in early August.  Rondo is the youngest puppy Jim has ever run and he seems to like the opportunity as he has placed 2nd in his first two events.
Lucy (Lakeview Kant Katch Me) was second in the Amateur Shooting Dog stakes and Hondo Muldoon was third.
So the Lakeview crew had a good day at the trial! The red dogs had 4 of the first 6 places given at the trial on Saturday. 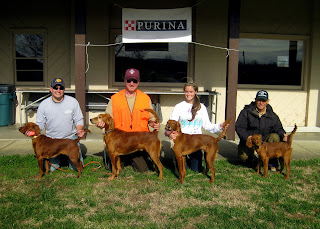 The picture , left to right, shows Lance Culver with Lucy Jim Ashby with Hondo, Lauren with Dexter and Charlie Turner with Rondo.  Mom and Dad with pups from two litters!
Great job Lakeview Kennels and to the new handlers and their red setter puppies!
Lakeview Kennels is proud to be a part of the Purest Challenge.
Posted by redpups at 8:06 PM