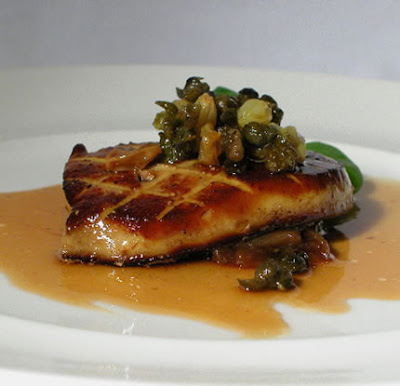 For those of you who are less refined than those in the Chicago area, Foie gras (pronounced/fwɑːˈgrɑː/ in English; French for "fat liver") is "the liver of a duck or a goose that has been specially fattened by gavage, or by slaughtering ducks or geese at migration time, when the liver is especially fat. Foie gras is one of the most popular and well-known delicacies in French cuisine and its flavour is described as rich, buttery, and delicate, unlike that of a regular duck or goose liver. Foie gras can be sold whole, or prepared into mousse, parfait, or pâté (the lowest quality), and is typically served as an accompaniment to another food item, such as toast or steak. The delicacy dates as far back as 2500 BC, when the ancient Egyptians began keeping birds for food and deliberately fattened the birds through force-feeding. Today, France is by far the largest producer and consumer of foie gras, though it is produced and consumed worldwide, particularly in other European nations, the United States, and China.

So, you're probably thinking, what's that got to do with the price of a Big Mac? Well, it turns out that 2 years ago the city of Chicago banned the sale of Foie gras in restaurants, much to the glee of the animal rights groups such as PETA. But, today, May 18 2008, the city of Chicago rescinded the ban on Foie gras,and the item is now back on the menu.

It appears that the city council interjected a little common sense for a change. If someone wants to go to a fancy restaurant and pay a lot of money to eat the fattened liver of a goose, they should be able to. PETA (and the city of Chicago) has no business regulating what people can and cannot eat. Another typical example of over-regulation, excessive animal control, intrusion of private rights, and a culture of permitting quasi-terrorist groups such as PETA pretend that they are legitimately representing the average citizen. Someone on the Chicago city council finally regained some common sense. Hopefully they'll spend more time trying to figure out how to fill in all the potholes on the Dan Ryan Expressway... now, that would make me a lot happier than banning exotic liver pate!! So, for those of you in Chicago, score a big win for animal consumption! Personally, I'll stick with a double cheeseburger (one buck on the dollar menu at McDonalds).

Want to try some Foie gras?? Dig deep into your pocketbook, and order some online...

Here's the report from the local news...

WASHINGTON, May 14 --Today in a stunning yet welcome reversal of an ordinance that had made the Windy City a national laughingstock, Chicago's City Council voted 37-6 to repeal a two-year-old ban on the sale of the delicacy foie gras. The move is certain to anger animal rights activists and please fans of gourmet dining.

David Martosko, Director of Research at the nonprofit Center for Consumer Freedom, reacted to today's news with the following statement:
"Chicago's latest experiment with Prohibition was always bound to end like this. It was just a question of when. Americans don't like government dictating what they can and can't eat. It's as simple as that. If misguided animal rights activists could maintain a ban on foie gras, it follows that veal, pork, and cheese would probably be next. We all knew that sooner or later, Chicagoans would stand up and refuse to become 'Tofu Butcher to the World.'
"Eating foie gras, or veal, or sushi, or anything else on the menu, should be a personal choice. The last thing a big city like Chicago -- or a small town like Anytown, USA -- needs is a Nanny State looking over the shoulders of restaurant customers. If animal activists, or anyone else in Chicago, doesn't like the idea of eating foie gras, they still have a simple option: Don't order it. The rest of the restaurant-going public should be left alone to make their own decisions about what to eat and drink."

The Center for Consumer Freedom is a nonprofit organization devoted to promoting personal responsibility and protecting consumer choices. Learn more at http://www.consumerfreedom.com/